Meet the experienced and friendly doctors and staff who make Cascade Eyecare the leading provider of vision care products and services in Bend. 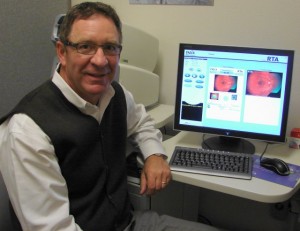 Dr. Steckman completed undergraduate work at Nebraska Wesleyan University and the University of Nebraska. He came to Oregon to attend the College of Optometry at Pacific University, and received his Doctor of Optometry degree from Pacific.

Dr. Steckman came to Bend in 1986. Cascade Eyecare operated for 14 years at a location in downtown Bend. In 2001, Dr. Steckman was invited to become a part of Vision Source, a by-invitation only group of some of the largest and most successful practices in the USA.

In May 2002, Dr. Steckman acquired Crestwood Eyecare, the practice of Dr. Craig Nielsen and Dr. Gene Wegner. As of May 2009 Cascade Eyecare is located off O.B. Riley Rd. We doubled our space and now carry over 750 frames!! While in Bend, Dr. Steckman has served as President of the Central Oregon Optometric Physicians, as well as state President of the Oregon Optometric Physicians Association.

Dr. Steckman has two children at home, a girl Sydney, and a boy Spencer. An older daughter, Shakira, is married and lives in Washington state.Dr. Steckman loves life here in Central Oregon. When not at the office, Dr. Steckman enjoys stand up paddle boarding, fly-fishing, skiing, Nebraska Cornhusker football, and most of all, spending time with his family.

You can schedule your next eye exam with us online!